Six things you need to know about women and ISIS

Last summer, the Islamic State captured Yazidi women and girls from Mount Sinjar — and captured the world’s horrified attention at the same time. As some recall, in August 2014, ISIS forces broke through Kurdish defenses in Northern Iraq, leaving the Yazidi community — which ISIS considers heretical — vulnerable. One hundred thousand Yazidi climbed up the mountain to escape, prompting international humanitarian assistance — but  in the end, more than 3,500 Yazidi women were abducted and subjected to torture, rape and other sexual atrocities, as documented by Amnesty International. Girls as young as 9 were gang-raped, and women were sold at slave markets for as little as 1,500 Iraqi dinar ($13 dollars). Here are six things you need to know about the way ISIS treats women — in ways that make perhaps the world’s most brutal perpetrator of gendered violence.

“Most striking are the growing signs of friction between the foreigners lured by its state-building experiment and local recruits, who have grown resentful of the preferential treatment meted out to the expatriates, including higher salaries and better living conditions … and better women.”

2013 list of persecutors of Christians dominated by Muslim countries 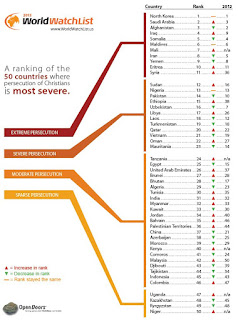 Posted on January 13, 2013 by creeping
via Islamic extremism dominates persecution list
WASHINGTON (BP) — Islamic extremism, especially in Africa and the Middle East, dominates the latest annual report on global persecution of Christians.
Eight of the top 10 persecutors of Christians — and 24 of the top 30 — are countries marked by militant Islam, according to Open Doors’ 2013 World Watch List released Jan. 8.
Meanwhile, North Korea, a non-Islamic country, maintained its hold on the No. 1 spot in the Open Doors list for the 11th consecutive year.
“Islamic extremism is the prime persecutor of Christians in the world today,” said Ron Boyd-MacMillan, Open Doors’ chief strategy officer, at a Washington, D.C., news conference. Among 24 of the leading 30 persecuting countries, “it is Islamic extremists, either in government or in violent opposition forces, that are the source of the persecution,” he said.
The new list of the world’s most severe persecutors of Christians includes five African countries that were unranked last year but reached the top 50 because of the impact of Islamic extremism: Mali (No. 7); Tanzania (No. 24); Kenya (No. 40); Uganda (No. 47), and Niger (No. 50).
In addition, militant Islam in Ethiopia helped catapult that East African country from No. 38 to No. 15. The Muslim state of Sudan, Ethiopia’s neighbor, jumped from 16th to 12th.
The uprisings against totalitarian states in North Africa and the Middle East that began about two years ago have produced greater persecution for Christians, according to Open Doors.
“The Arab Spring has turned into an Islamic Winter for the Christians in the Middle East,” Boyd-MacMillan told reporters. “In every country where a regime has been deposed — such as Tunisia, Libya, Morocco and Egypt — Islam is still in power and putting pressure on the Christian minority.”
The top 10 countries on Open Doors’ latest World Watch List, which covered November 2011 through October 2012, are: (1) North Korea; (2) Saudi Arabia; (3) Afghanistan; (4) Iraq; (5) Somalia; (6) Maldives; (7) Mali; (8) Iran; (9) Yemen, and (10) Eritrea.
Syria, which is torn by civil war as a result of an Arab Spring-like conflict fueled by militant Muslims, jumped from 36th to 11th this year.
Download the report here.


A mob of more than 500 Muslims torched a church in Ethiopia after police had destroyed the roof. The church, in the village of Qoto Baloso, Silte province, was burnt down on 29 November 2011 by Muslim students, accompanied by Muslim police officials. The students were shouting "Allahu Akbar" ("god is great") and "jihad".
More than 30 police officers were deployed to destroy the church, but in the face of protests from local Christians, they held back from demolishing the rest of the building.